The White Swiss Shepherd Dog also known as the Berger Blanc Suisse is a herding dog which has emerged from white lines of the German Shepherd Dog.   These two breeds are 'genetically' the same, however the White Swiss Shepherd differs somewhat in both conformation and movement to the GSD currently seen in the show ring.   Both breeds have evolved distinctively over a quarter of a century  and have their own 'DISTINCT' Breed Standards.
WSSD (FCI) Breed Standard link - http://www.fci.be/nomenclature/Standards/347g01-en.pdf 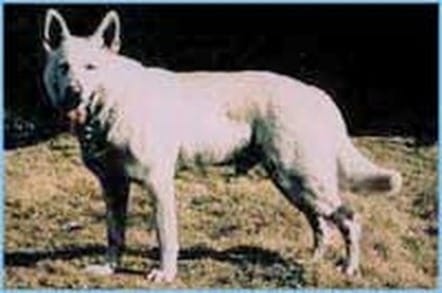 'LOBO WHITE BURCH'
American and Canadian White Shepherds that have been bred for their white coat and dark pigmentation over many generations are the foundation of the White Swiss Shepherd Dog and the progenitor in Switzerland was considered to be an American White Shepherd called 'Lobo White Burch' born in 1967. He was owned by Miss Agatha Burch who returned with him to Switzerland after living many years in the USA. Miss burch also imported a female from the UK called 'White Lilac of Blinkbonny', these dogs bred along with other imports from America and Canada (including the UK) under the prefix 'Shangrila' are considered to be the foundation of the White Swiss Shepherd Dog.

Since 1991 the White Swiss Shepherd Dog has been registered as a new breed within the Swiss Studbook and in November 2002 the Fédération Cynologique Internationale (FCI) recognized the breed on a provisional basis. Official FCI recognition was given at the world Dog Show in Paris on the 5th July 2011 and as Switzerland was the first country to officially recognise the White Swiss Shepherd as a distinct breed, they were credited as the country of origin, hence the name BERGER BLANC SUISSE / WHITE SWISS SHEPHERD DOG

RECOGNITION IN THE UK
On 19th July 2017 the UK KC announced that the White Swiss Shepherd Dog would be given Kennel Club recognition with effect from 1st October 2017
http://www.thekennelclub.org.uk/press-releases/2017/july/new-breed-–-white-swiss-shepherd-dog/